Throughout the Witcher series, especially in the earlier anthologies and the video games, Geralt makes the claim that he no longer has proper emotional responses because of the mutagens and potions the witchers fed him as a child. As readers, I think we’re supposed to be skeptical of this claim, even from the outset, because it conflicts with the choices and decisions Geralt makes throughout the series. In addition, those closest to Geralt always regard assertions along these lines as a crock of shit. This much was always apparent to me, but it wasn’t until I got into the later novels of the series that I truly understood the larger purpose this recurring theme served in the whole of the series, and frankly, it heightened my appreciation for the works in the Witcher series all the more.

Tavik went first. He was chasing the witcher when he saw Geralt running in the opposite direction, toward him. He skidded, trying to stop, but the witcher shot past before he could raise his sword. Tavik felt a hard blow just above his hip, fell to his knees and, when he saw his hip, started screaming. The twins simultaneously attacked the black, blurred shape rushing toward them, mistimed their attack and collided with each other as Geralt slashed Vyr across the chest and Nimir in the temple, leaving one twin to stagger, head down, into a vegetable stall, and the other to spin in place and fall limply into the gutter.

And now compare that with this passage from the fourth novel featuring Ciri in an arena pit:

She slipped between them with a balletic pirouette, so lightly she almost didn’t touch the sand. She struck Matted Hair in passing, precisely where he ought to be struck: in the carotid artery. The blow was so subtle it didn’t jar her rhythm. She ducked away in a reverse feint, so swiftly that not a single drop of the blood gushing from Matted Hair’s neck in a two-yard stream fell on her. Amaranth, behind her, aimed to slash across the back of her neck, but his treacherous blow clanged against a lightning-fast parry of her blade, held up behind her. Ciri unwound like a spring, slashing with both hands, amplifying the blow’s power with a jerk of her hips. The dark gnomish blade was like a razor, and cut his abdomen open with a hiss and a squelch. Amaranth howled and flopped forward onto the sand, curling up in a ball. Horsehide leaped at Ciri and thrust towards her throat, but she dodged, spun fluidly and struck from close quarters with the middle of the blade, mutilating his eye, nose, mouth and chin.

I don’t think this is simply a matter of an author becoming more detailed with his descriptions over time. Ciri, throughout her time with The Rats, has been struggling between humanity and the deadly murderous reflexes imparted to her during her time as a child with the witchers of Kaer Morhen. During the dramatic scene with Bonhart at the end of Baptism of Fire and again here, Ciri is without all her childish fantasies of what it means to be a fighter. Sapkowski is forcing Ciri and by extension the reader to look deeply at what it means to kill on pure reflex with hardly a conscious thought. The drills and practice sessions have made parries, ripostes, and even improvisation into reflexive acts, but Ciri doesn’t yet have the detachment and the emotional callouses that the more experienced Geralt has developed over time. In moments where she is watching the last desperate breaths of men she dispassionately tore apart, Ciri is forced to critically examine what it means to be like Geralt, her childhood hero and father figure, and in those moments, the reader is forced to as well.

The witchers are child soldiers, trained in the arts of war and forged in the fire of experience before they even have the capacity to evaluate their own sense of right or wrong. Throughout the series, we are told that most boys don’t survive the process of becoming witchers, and I submit that it’s not merely the potions, mutagens, and battles with monsters that kill them. To be a witcher is to live with mental scars: flashbacks of the horrors you’ve both experienced and inflicted, memories of other young children who died right beside you by the whims of ill fortune, and torture you’ve been forced to endure with the intent of either hardening you or pruning you via artificial selection.

As I played through The Witcher 3, my choices led me to an ending where Ciri truly becomes a witcher, and in my naïvité, I felt as though I had attained a “good” ending, forgetting all the while that the universe of The Witcher is not a place for happy endings. Witchers are only capable of fighting monsters because they have become monsters themselves, and as a player, you could make an argument that I’m playing the role of the Sword of Destiny in this dark fairy tale. Did Ciri’s own choices and actions lead her to this path, or was it Destiny encouraging and influencing those choices?

‘The Sword of Destiny has two blades… You are one of them.’ 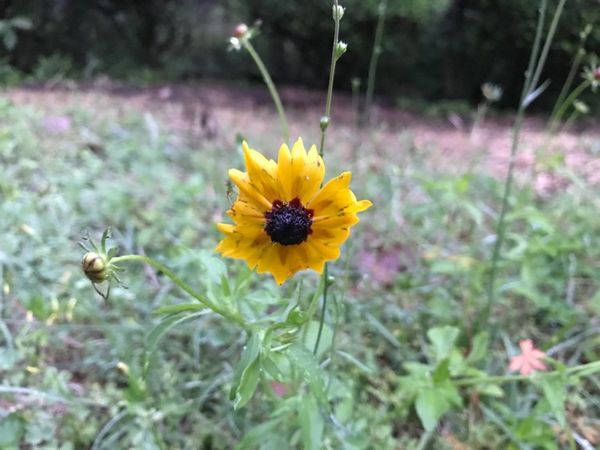 Yesterday, our first black-eyed susan bud opened in all it’s glory, and if you look closely, you can see a tiny spider chillin’ on the petals.