Undoubtedly, ordinary people benefited to some extent from these changes. The system was rich, productive, complex; it could give enough of a share of its riches to enough of the working class to create a protective shield between the bottom and the top of society. A study of immigrants in the New York between 1905 and 1915 finds that 32 percent of Italians and Jews rose of the manual class to higher levels (although not to much higher levels). But it was also true that many Italian immigrants did not find the opportunities inviting enough for them to stay. In one four-year period, seventy-three Italians left New York for every one hundred that arrived. Still, enough Italians became businessmen and professionals, to create a middle-class cushion for class conflict

(A People’s History of the United States by Howard Zinn)

This touches on something I’ve been thinking about and meaning to write about for some time now. I came from a very rural and poor background. My dad was a preacher at tiny Southern Baptist churches, which barely paid for groceries. He and my mom also held a series of working class gigs to actually feed our family and keep us clothed: soda delivery, sewing factory work, data entry, etc. I was only able to attend university because I was lucky enough to have been really intelligent during a time when the state of Florida had funding for scholarships, grants, and other financial aid. There was money to lift me out of a working class background (when paired with enough credit card debt to push me immediately out into the workforce instead of grad school). Without assistance from the state, I couldn’t have afforded an education at a top-tier state school, and I certainly couldn’t have made the connections that now have me working as an engineer at said top-tier state school.

What role does my education serve in the context of capitalist hegemony? Simply put, I think that working class kids like me being lifted up like this is a form of what Roland Barthes would call inoculation. We help maintain the idea that class mobility is possible if you’re willing to “work hard.” We are the examples held up to prove that America is a meritocracy. But really, it’s ultimately a lottery. How many others from my community could have done the same If I hadn’t won this particular lottery? I can easily think of several very real people from my past with no effort. In addition to the class aspect, how many black and brown folks from the woods of Hamilton County also deserved to walk across the stage of the O’Connell system to receive their degree? We all deserve the chance, and much like Paul after his Damascus Road experience, the scales have fallen from my eyes on this matter. It is my responsibility to leverage the power I’ve been given to help advance the conditions of every working class person. It’s my responsibility to make apparent to the capitalist oppressors that, by giving me a university education, they have forged a weapon that will help strike this corrupt system down.

It would be very easy for someone in my position to be drawn in by the siren song of capitalism and the illusion that I got where I am because I worked harder, was inherently smarter, or just “wanted it more.” But thankfully, I’ve reached a point in my life where I understand that those notions are bullshit. If I’m not leveraging my advantages to change the system for the benefit of all — and if I’m not willing to give up part of the bounty I’ve been given to help others who didn’t win the “meritocracy” lottery — then I have given in to the path of selfishness and evil. Stated perhaps more succinctly, if I’m not working toward socialism, doing nothing is the same thing as working for capitalism.

…“the economy,” which was a short-hand term for corporate profit… (A People’s History of the United States by Howard Zinn) This is a very useful thought technology. We should all implement a substitution in our heads for these two phrases. s/the economy/ 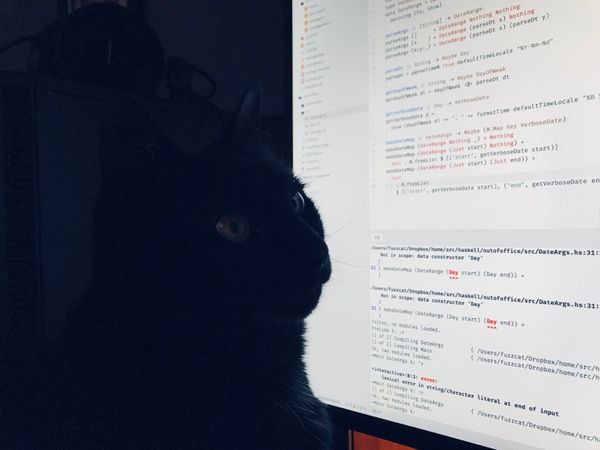 When you first encounter Haskell-inspired structures like Maybe, Either, or Reader, they might seem needlessly complicated. I myself was guilty of thinking that these abstractions only served to obfuscate control